We honor all who have served and who are serving to protect and keep our nation free.

While teaching in the English Department at Radford University in Virginia, Margaret Brown was given the creative license to develop a unique curriculum for the Honors Program that would focus on one topic for the semester.  For a number of years, her focus was The Vietnam War.  Aided by members of the Vietnam Veterans of America Chapter #138, Margaret witnessed a new generation gaining new insight on a war that some may say we are still fighting.

That Time, That Place, That War is an illustrated reference book that sprang from  Margaret Brown’s experiences teaching this honors program.  The book is arranged alphabetically from Alpha through Zulu, explaining the general vernacular of the infantrymen during the Vietnam War.  With poetry by the soldiers themselves and photos very personal and unique to those who were there, those who remember, those who might not have shared their story in any other way, Margaret’s book is poignant and depicts perspectives not published before.
For more information, visit www.televisionwar.com. 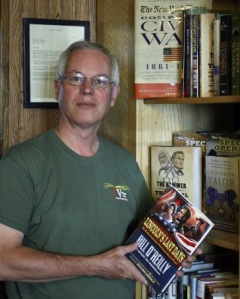 Dwight Jon Zimmerman is a bestselling and award-winning author, radio show host, producer, and president of the Military Writers Society of America and a member of the Western Writers of America.

Zimmerman is the co-author, with Bill O’Reilly, of the New York Times #1 bestselling Lincoln’s Last Days, a young adult adaptation of Bill O’Reilly’s bestselling Killing Lincoln.  Additionally, among his many published tities, Zimmerman was the researcher for The New York Times Complete History of the Civil War, a critically acclaimed dual biography of abolitionist Frederick Douglass and Abraham Lincoln The Hammer and the Anvil, and through beautifully rendered artwork, The Vietnam War: A Graphic History depicts the course of the war from its initial expansion in the early 1960s through the evacuation of Saigon in 1975, and what transpired at home, from the antiwar movement and the assassinations of Robert Kennedy andMartin Luther King Jr. to the Watergate break-in and the resignation of a president.

Zimmerman has been a guest lecturer at the U.S. Military Academy at West Point and the Naval War College.  He was a producer for the independent film, Trooper, which received the Bronze Remi Award at the 2010 Houston International Film Festival.

Zimmerman began his career in publishing at Marvel Comics, where he held a variety of editorial positions. Among his Marvel comic book writing credits are stories for Spider-Man, The X-Men, and The Hulk, and other superheroes. In 1992, Zimmerman became executive editor of Topps Comics and was responsible for the editorial and art direction of its lines of media tie-in comics including series based on The X-Files, Mars Attacks, Jurassic Park, Zorro, Xena: Warrior Princess and other titles. In addition, Zimmerman was the writer, editor, and art director of Princess Diana the graphic novel biography of Diana, Princess of Wales published by Topps.

Zimmerman is a host of the Veterans Radio program “At Ease.” The program airs Saturday mornings at 9 a.m. Eastern time and can be listened to on the Internet at www.veteransradio.net,  and we look forward to his visits with us on Military Mom Talk Radio as president of the Military Writers’ Society of America.