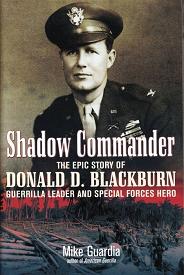 In a career which spanned over thirty years, Donald D. Blackburn was a true hero of the Army Special Forces.  Shadow Commander is his story.  Amidst the chaos of the American defeat on Bataan in April 1942, Army Captain Donald D. Blackburn escaped to the jungles of North Luzon, raising a remarkably effective guerrilla regiment known as “Blackburn’s Headhunters.” Blackburn’s World War II exploits were but the first in a storied life that took him to the highest echelons of the U.S. military.  Shadow Commander follows Blackburn from World War II to his days as a one of the pivotal figures in the development of America’s Special Forces.

Following World War II, Blackburn played a key role in initiating Special Forces operations in Southeast Asia, taking command of the highly classified Studies and Observations Group (SOG), which targeted Communist incursions along the Ho Chi Minh Trail. In the wake of the CIA’s disastrous Leaping Lena reconnaissance program, Blackburn revitalized Special Operations in Vietnam, and later conducted full-scale operations against the NVA and Viet Cong infiltrating the south via Laos.  Following his return to the U.S., Blackburn was appointed “Special Assistant for Counterinsurgency and Special Activities,” where he was the architect of the Son Tay Prison Raid, the largest Special Forces operation of the Vietnam War.

Mike Guardia is an Armor Officer in the United States Army.  He holds a BA and MA in American History from the University of Houston.  As an author, his interests include the history of guerrilla warfare, armored warfare, and World War II in the Pacific.  He is the author of the critically-acclaimed book American Guerrilla: The Forgotten Heroics of Russell W. Volckmann by Casemate Publishers, and the forthcoming US Army and Marine Corps MRAPs, scheduled for release this November from Osprey Publishing.  He is currently stationed at Fort Bliss, Texas. 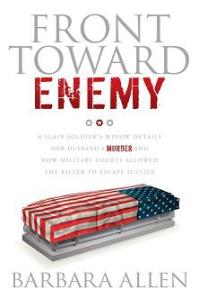 Barbara Allen is the widow of 1LT Louis Allen, who was killed in Iraq in June of 2005. Her award-winning book, “Front Toward Enemy” chronicles the personal and factual accounts of her husband’s murder at the hands of a fellow soldier, and the subsequent acquittal of his killer. How can American soldiers be at risk among their fellow soldiers? How could these murders have been prevented, and how could this government allow a killer to go free?
Front Toward Enemy is the personal and factual account behind the scenes of a case that is to the military judicial system what the O.J. Simpson case is to the civilian judicial system.

Barbara is currently at work on her second book, expected to be published in 2014. In addition to her work as an author and a freelance writer, Barbara is co-founder of Bold Biographies, a business dedicated to writing personal biographies for her clients to pass down in their families.

Barbara received a Masters degree in Criminal Justice from American Military University, and actively reaches out to other families grappling with the military judicial system. She continues to pursue the Purple Heart for her husband, as the government has thus far refused to classify Lou’s death as “Hostile.”  She resides in NY with her four boys.

Autumn Arnold is a single mom of two small children, and was looking for some serious help.  Plagued with depression, fatigue, heartburn, and high blood pressure, she found a nutrition program that after only two weeks of starting the program, saw a great imporvement in her heartburn and high blood pressure and her energy shot through the roof.  But the best part, she says, is that she has lost 33 pounds and gone from a size 20 to a size 14 and still going.

Autumn is helping us find the healthy approach to the new year and how we can set realistic goals for ourselves and our families.  She feels empowered to change lives with health and wants you to be empowered, too!!